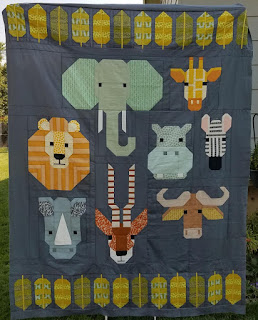 How is your Savanna herd shaping up? Spectacularly I hope.

My critters are all wrangled! I can hardly believe it.

I love this quilt so much. It was a lot of fun to make.

Ok, I had a few moments when I cussed under my breath. You know how much I don't like cutting little bits.

But the actual sewing part was not at all difficult.

The assembly of each animal was well thought out. And the instructions for assembling them into an actual quilt were very clear.

Everything fit together as it should.

For every time I cussed, I had at least a couple of times of saying, "I love this quilt!"

Thank you, Elizabeth, for an awesome sew along.

Now the bad news: It won't be quilted anytime soon.  😢

I'm planning to have it custom quilted. I have to save up a stack of Yankee Doodle$ before that can happen.

Adulting is a bummer!

But I'm very encouraged about how the pattern came together and not at all opposed to doing another Elizabeth Hartman quilt sometime. I gotta say, her patterns are all adorable.

Elizabeth has one called Greenhouse that my daughter would love, Love, LOVE!

But my grandsons are the ages that Dinosaurs would really appeal to them.

Decisions. Decisions. But I don't have to decide right now. Whew! 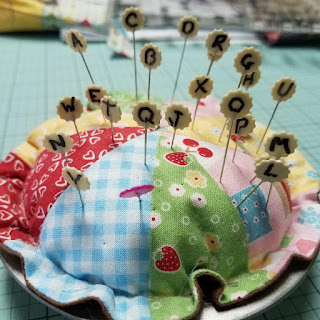 Every block in Spectacular Savanna had a LOT of little pieces. Elizabeth has labeled each piece with a letter of the alphabet. Some of them with double letters. Because some of the blocks have more pieces than we have letters.

For most of the quilt I used little stickers with the letters written. Those stickers will likely be wandering around in my house for years.

With only a couple of critters left to sew I purchased letters that could be pinned to the pieces.

After those letters were no longer returnable (of course after), I had a light bulb moment.

I just pulled out a sharpie marker and wrote the alphabet on the heads of flower head pins.

Why didn't I think of that a year ago?

But it's been thought of it now and I'm passing that wisdom on to you.

Let's check in at Pattern Pastiche, the private social network community for quilters.

But it's in the past and we're looking to the future now.

We're just really, really glad to be back together.

My quilts in The Quilt Pattern Magazine, October issue: 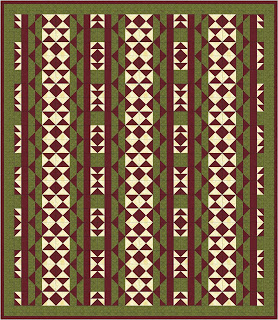 Rustic Queen mystery wraps up this month. It started back in June. The pattern was written as an actual queen size. Hence the name, Rustic Queen. It was a lot of work but it looks really cool.

Ok I confess. I made mine throw size, not queen size. It still looks with only 16 blocks.

I drafted this pattern as part of the design challenge workshop last year. I had no intention of ever making it because of the millions of seams required.

When Cindy (the owner and CEO of TQPM) asked if she could publish it, I wasn't going to say no.

So I made it. And I was right, there were a lot of seams. The awesome secondary designs made it worth it. 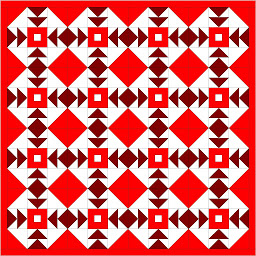 The cute baby size quilt, Nana's Bracelets, also a product of last year's design challenge, is in TQPM this month. You don't have to make it in red. It's also darling in blue. I'd love to see someone make it scrappy. It would be pretty, like Pandora beads, only not as expensive.

It's a simple pattern. Nothing more difficult than Flying Geese.

You can subscribe to the magazine using the discount code SP.

Of course, mine aren't the only patterns in the magazine. Every month has a variety of quilts that come in all sizes and styles.

If you have a pattern you'd like to publish, let me know in the comments. I can hook you up.

Have a great week. Thanks for stopping by.

PS. Just for fun I thought I share some photo bloopers. First is my "helper" (aka my son Mitch) playing peek-a-boo (or peek-a-boothe) while I'm trying to get a photo. Then comes Jack apparently wondering why Mitch is hiding behind the quilt.  Good help is so hard to find. ;-] 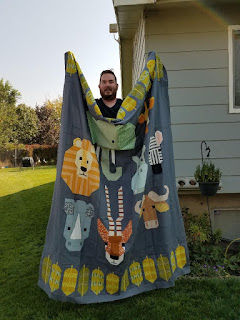 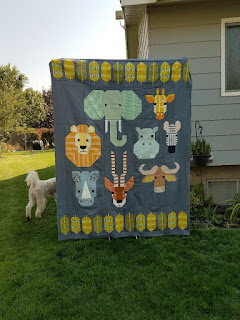