I think he looks amazing!

Nope? Neither did I until It was too late to fix it.

No one will notice unless I point it out. Let me know in the comments if you find it.

Kit -
The fabrics are in general order. However, I mixed up the lion and giraffe solid colors. (One of the prints is the same so the fabrics for both critters are added together.

Make sure you are using the fat quarters for the Lion and the fat 8ths for the Giraffe. I had everything cut before I realized I'd cut the wrong fabric. It's salvageable but annoying.

I ended up with spare parts when I was finished.

When that happens it's a clue that you made a mistake.

Find the mistake and decide if you can live with it.

If not, get out the seam ripper. If so, move on as I did.

I'm enjoying making this quilt. It's pesky to cut the pieces but the end results are worth it.

Hippo is next in the pattern, but I'm skipping to the Giraffe. It uses one of the same fabrics as Lion so it seems logical to me. And because I'll be dealing with that cutting error I mentioned, I feel like I need to get onto it sooner rather than later.

I also want to let you know I have a new pattern coming out in The Quilt Pattern Magazine in March.

Four Winds is a generous queen sized quilt that is surprisingly quick to sew.

It's a beginner project if you can handle the bulk. I designed, ordered fabric, pieced and quilted the quilt in less than a month. It's simple as well as beautiful! 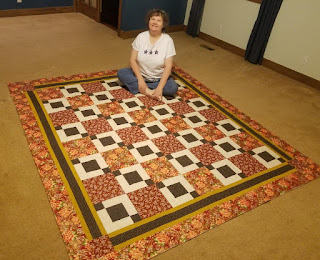 If you've not yet subscribed to the magazine, use the code SP and get a discount just for reading my blog!

Have a great day of sewing!